Not long ago, I saw the Olivier Giraud one man show How to become a Parisian in one hour ?. This young humorist challenge to play in Paris a 100% English speaking show. And, in his show, he spends his time to mock the French people and Parisians particularly.

In future, I’ll try to write one article by one output. Instead I did during past few month (like here). I think it’s better, because there will less time between two articles.

But now, let’s see How to become a Parisian in one hour...

On the entertainment flyer, you can read about de show :

You love Paris, but you think that Parisians are rude ! You’re right, they are !
You are too nice and you want to become arrogant !
Do not wait and come to my training ! 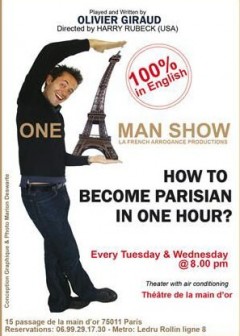 This comedy show is build like a coach lesson ; like a conference were the speaker, Olivier Giraud, is trying to make you becoming as rude as a real Parisian. You can learn how to be a Parisian in a restaurant, in a shop, in a taxi, in the métro... At the end, there is a test, like at school. So you will know if you can pretend to be like a real Parisian.

Don’t be afraid. It’s not so anti-Parisianist as it seems. The comedian also mocks the American tourists. He goes both ways. And, it’s very funny. I laughed frankly all along the show.

If this show is all in English, it steal easy understood by every one who used a little English LV1 at high school. If you are understanding this text, you would see the show without any problem. The best proof is that I understood all that the showman said ! He is French and he speak with a French accent.

So, I think it’s a very good show. I liked it. But it is too shorty. There is not enough lessons. I’d like it lasts longer.

The negative is the place were the show is done. In the Théâtre de la main d’or. You know, Dieudonné, the French anti-Semite humorist ? This is his own theater.

So, I conclude my article with a special dedication to Monica, the Brasilian pretty girl who climbed on stage at the end of the show. She made it even better.